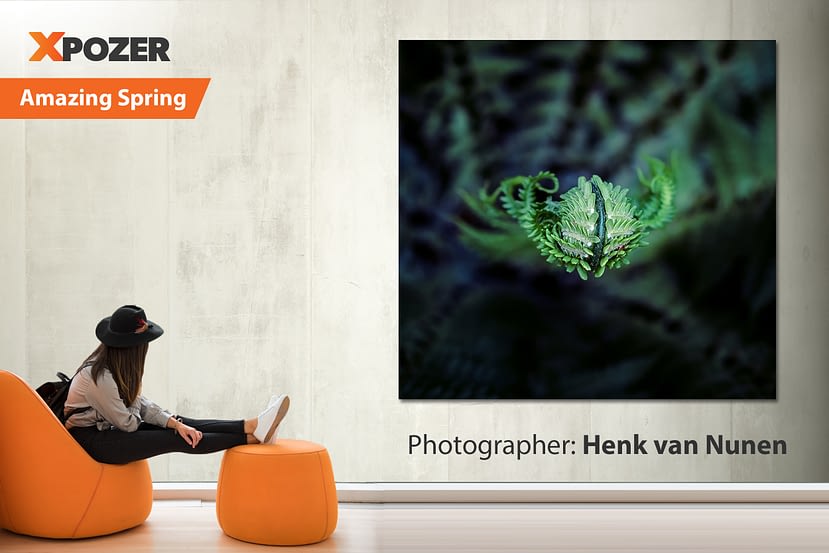 We launched our “Amazing Spring” photo contest in May 2019 and received over 600 AMAZING entries from you! Curious about what drove Henk to capture the winning shot and why it means so much to him to have his photo on the wall as an Xpozer? We chatted with him last week about his passion for photography. Today we’ll be sharing his story.

All About the Details

Ever since Henk van Nunen started photography he became more mindful about his surroundings. Photography taught him to view things differently: Nature, the streets, the buildings both historical and modern, the people, animals (big and small), you name it. He finds there are so many beautiful things around, even in the smallest details. For example how the light interacts with something. For Henk, it’s never boring.

Henk often goes on nature walks while it’s still dawn and gets completely entranced by the nature around him. He purposefully takes time to enjoy the peace and beauty that surround him. Before he starts taking photos he asks himself: What’s the story that nature and its inhabitants are telling me? ​​His surroundings show him the story he should capture with his camera.
Henk believes that sometimes it’s important to keep your camera in the bag. Doing so pushes you to take the time to soak up the peace and quiet, to really get to know your surroundings. You can always come back with your camera another time. According to Henk, it’s important to remember that we don’t have to take photos – we get to…
What really shines through from our chat with Henk is that it’s an incredibly rewarding experience for Henk to photograph and discover.

The winning photo is named: “UFOs? Unidentified Flora Objects”. Why? Henk likes to photograph flora in a way that makes people have to guess what they’re seeing. This approach often makes the photos appear unbelievable and people often do not recognize that part of the plant or flower, while they are well-known plants or flowers.
Henk will be presenting his winning photo along with two other flora photos at a photo exhibition in November. After that it’ll be given a spot on the wall in Henk’s home.
Size 60×60cm/ Xpozer.


Winner Photo Contest ‘Around the World’


How to win a photo contest